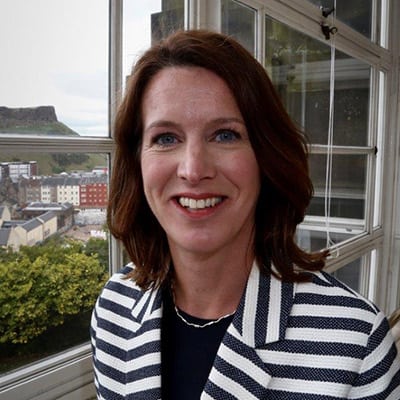 Catherine Calderwood, former Chief Medical Officer for Scotland 2015-2020. She was responsible for the Health Promoting Health Service initiative which aimed to tackle health inequalities and improve health across the population of Scotland and lead work to improve the health of those working in the public sector specifically NHS and civil service staff.

As a medical adviser to the Scottish Government she was instrumental in the work which has led to a 20% reduction in the number of stillbirths across Scotland. She continues to support this work and the work in reducing neonatal deaths and avoidable harm in maternity services. She has overseen the development of a Major Trauma Network for Scotland. She is Chair of the Taskforce for the Improvement of Services for Victims of Rape and Sexual Assault, the Committee on Antimicrobial Resistance in Scotland and the Scottish Global Health Collaborative. She has published physical activity guidelines for babies and children, pregnant women and adults and low risk drinking guidelines along with the Chief Medical Officers in England, Wales and Northern Ireland.

Catherine has published two annual reports on Realistic Medicine. Realistic Medicine puts the person receiving health and care at the centre of decision-making and creates a personalised approach to their care. Her second report published in February 2017 builds on the first report by setting out a vision and priorities: showcasing international and national multi-professional support from clinicians, leaders from medicine and public health and stakeholders from a wide group of organisations. These reports have been universally well received.

Do you want to feedback on issues that affect gender equality? See our current Spotlight topic, we would love to hear from all communities across Scotland.